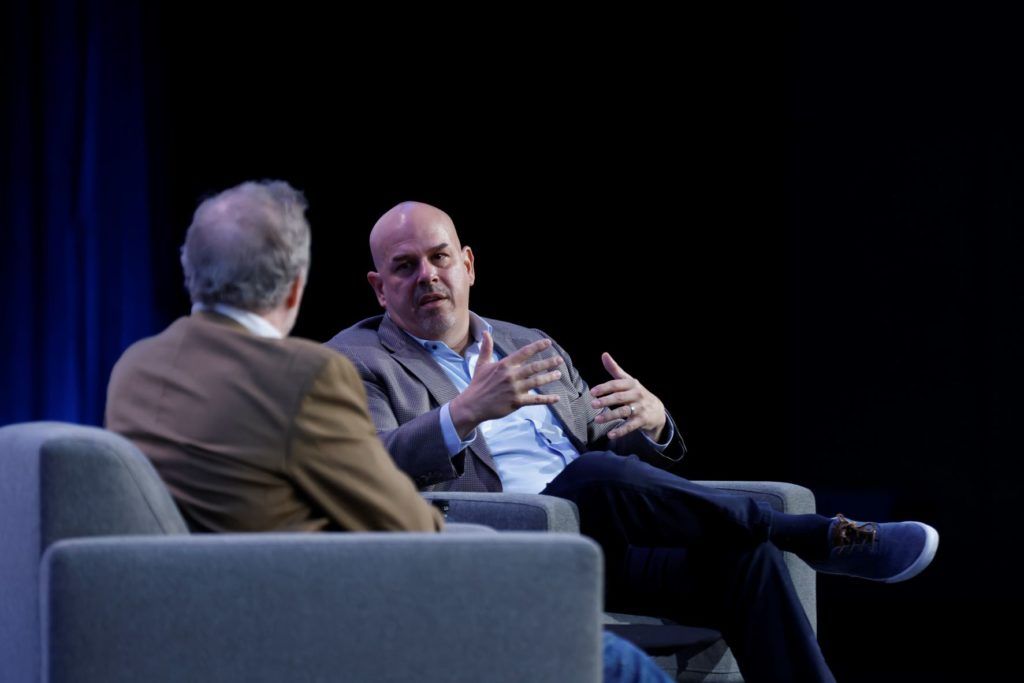 The third and final day of Cloud Wars Expo, taking place in San Francisco’s Moscone Center, was filled with industry cloud insights to help CXOs and other business leaders drive growth and reimagine their businesses. The day kicked off with a keynote conversation between Cloud Wars founder Bob Evans and Oracle EVP, Industries Mike Sicilia. It ended with the Cloud Wars Startup of 2022 being named. Here are some of the highlights.

Sicilia discussed Oracle’s recently completed acquisition of Cerner to reinvent the health care industry, which has a pressing need for that reinvention. For instance, he noted that patients and providers have been underserved by technology for years, evidenced by the fact that providers spend two hours interacting with systems for every hour they spend with patients.

“These are crazy things. Somebody has to fix it; somebody has to make it better,” Sicilia said. “We see it not just as a business but as a moral obligation.” And without owning an asset of Cerner’s scale, with a massive installed base, it wouldn’t have been possible for Oracle to take this “bold” step forward.

Since the Cerner technology is built on Oracle’s Exadata platform, that ensures customers won’t have to rip and replace systems or change data models. “We can layer new functionality on top of what people have” and move forward “with great velocity,” Sicilia said.

The company’s agenda includes adding vertical functionality to horizontal systems — in healthcare and in other industries. For example, the company will extend its core HR system with hospital staff scheduling functionality.

Looking ahead to the future in healthcare, Sicilia predicted that hospitals in the future will be a higher number of smaller, dispersed sites that are closer to patients, with more care (and clinical drug trials as well) taking place outside of hospital settings.

Asked what has pushed industry clouds to the forefront in the last 18 to 24 months, Sicilia said Covid was a huge factor. The flexibility afforded by cloud apps to scale up and down elastically (hotels, food and beverage customers had to scale down dramatically then scale back up) is a major win for customers, and a major factor in their embrace of industry clouds. “If you can’t scale the entire ecosystem up and down, that really becomes a problem from an ops standpoint,” he said. Sicilia also credited Cloud Wars and Evans specifically with playing a thought leadership role that has created major awareness for industry clouds.

Picking up the theme on the benefits of cloud technology, Sicilia also addressed economic conditions and customer’s readiness to invest in technology today. The flexibility afforded by being able to scale up and down is fueling cloud growth (as supported by Oracle’s recent financial results), not causing it to go in the other direction. He noted, for example, that with the cruise line business (a major Oracle customer segment) effectively shuttered during Covid, all ships were in port and that created an opportunity to upgrade their tech infrastructure and ramp up cloud usage. “Pre-Covid there was some hesitation to move stuff to the cloud. That’s all gone. Now it’s ‘how fast can I get there’?” He said there won’t be a strong willingness to spend on “old stuff”

Podcaster, author and CMO Christopher Lochhead laid out his case for why “native digitals” will be the death of the S&P 500. Native digitals are age 35 or under and their experience with everything in lifeis digital first. Native analogs (over 35) have experiences that are 180-degrees different.

The increasing size, and importance, of native digitals, presents a massive opportunity for innovation and startups, Lochhead said. “This is the greatest opportunity for startup innovation in history. If you’re in the innovation business, creating a different future, your ability to create a new category of something has never been higher. It’s incredibly exciting.”

Referencing some of the cultural disconnects, companies like Netflix and Google have pushed for employees to return to offices on the premise that the best work, and innovation, has to occur in that setting. “That’s absolutely wrong and it’s been proven wrong in the case of those companies.”

Native digitals haven’t been quick to buy the return to office argument. He also noted that native digitals will refer to a Zoom meeting as an in-person meeting, and will explicitly say a physical face-to-face meeting or dinner is in the RL.

Weighing in with his view on the future of the Fortune 500, Christian Anschuetz said there’s significant churn in those companies because big firms have a tendency to fall in love with what they do more than the people they do it for. “What that means is they’re making incremental changes to make something a little faster, a little lighter, less expensive, meantime the entire category shifted. One of the reasons digital transformation efforts fail to reach their target is because the target was never understood well in the first place.”

Anschuetz advised those in attendance to review their calendars and categorize their meetings as a way to ensure they remain customer focused: “What percent are internal BS with respect to your firms and how many are specifically and explicitly about figuring out or addressing a customer or market need?” Anschuetz and Lochhead both railed against the use of the term “internal customer,” noting there’s only one customer, and that’s the one that buys your product.

The Cloud Wars Startup of 2022 is Wisy, which developed an AI-driven system to help CPG firms optimize the performance of their products in the retail setting. Congratulations to Wisy, its CEO and founder Min Chen, and all the participants in the Innovation Path and its startup competition.