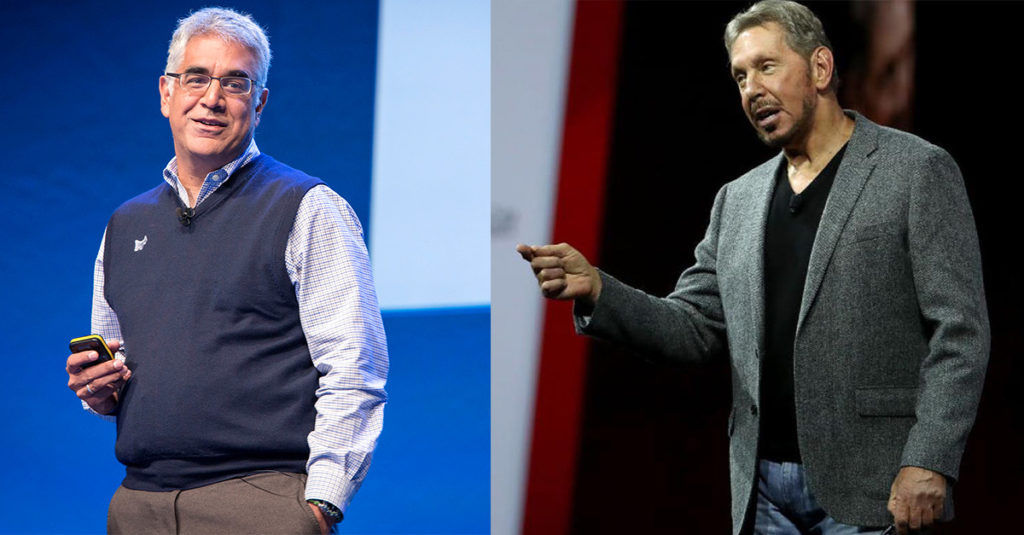 It’s surely a great understatement to say there’s no love lost between Oracle and Workday. But the leaders of both companies are in violent agreement over the voracious appetite for SaaS applications among large organizations.

At a recent investors conference, Workday cofounder and CEO Aneel Bhusri spoke on this trend. “The cloud is now viewed as the preferred deployment option versus on-premises,” he said. “That’s true even for CFOs for both planning and core accounting. That’s been the case in HR and CRM for a while, and it’s definitely beginning to happen in finance now as well.”

At that same event, Bhusri had more to say about Workday’s flagship HCM SaaS applications and its fast-growing Financials applications. (I analyzed these statements in a recent piece called Workday’s Path to a $1-Billion Quarter: 10 Key Insights.)

“The HR product line continues to do very well. We’re now mainstream in terms of the types of customers that are looking to move to the cloud,” Bhusri said. “And with the high levels of customer satisfaction and the proven points of customers being live, all of that bodes well for Workday…

Asked about uptake for Financials apps among large corporations, Bhusri said, “We’re seeing a very similar adoption pattern for the Fortune 500 as we did with HR five or six years ago. The more reference customers we have, and the more that customers are facing painful upgrades of their legacy systems, and the more regulations change with things like 606, those are all catalysts for us.”

Over at Oracle, founder and chairman Larry Ellison is a bit more outspoken than the intense but low-key Bhusri. And at Oracle’s recent OpenWorld event, Ellison said the floodgates are about to burst open in the SaaS business.

Ellison called the SaaS business “a gigantic opportunity for us.” That’s because, he said, big businesses are seeing the full potential of cloud applications.

A Sign of the Boom: Conservative Firms Embrace the Cloud

Ellison made a particular point of underscoring how even conservative businesses are becoming true believers in the power of the cloud. For example, big banks.

During his keynote, as he pointed to a slide showing the logos of customers using Oracle’s Fusion apps, Ellison said, “Wells Fargo is listed here—a giant bank—and  HSBC, an even bigger bank.

In a similar vein, Bhusri pointed to a financial-services company making the huge transition from on-premises applications to the cloud. Speaking at the investors conference referenced above, Bhusri shared some details. “We won Legg Mason for the full organization,” he said. “I’m not going into all the competitive dynamics, except to say they were happy with what they rolled out initially and so they decided to broaden their use of Workday.”

Bhusri went on, elaborating on the competitive opportunities that can arise in these moves to the cloud. “There are failed cloud implementations and sometimes there are cloud implementations of best-of-breed products tied back to legacy on-premises core HR and finance systems,” he said. “And all of those situations create opportunities for us. Because it all comes back to having happy customers and to having projects that are successful.

“So as we stay focused on that and [some companies] don’t have successful outcomes, we hope they’ll look to Workday.”

One person who’s definitely looking at Workday, if perhaps not to Workday, is Oracle’s Ellison. While noting that Oracle now has 31,000 SaaS customers—including a huge number of those obtained in the NetSuite acquisition 3 years ago—Ellison made sure he called out the numerical advantages he believes his company has over Workday.

“In cloud ERP, we have combined [Oracle plus NetSuite] about 25,000 customers. And second place in the cloud in ERP is Workday,” Ellison said in one of his two keynotes at OpenWorld.

“So we have a really large share of the market in cloud ERP. And we’re actually increasing that market share over the last couple of years.”

The appeal of the cloud is growing rapidly. And that growth is bringing brand-new customers into play for SaaS applications, Ellison said.

“This is very interesting. Of our Fusion application customers, three-quarters of them do not have other Oracle applications. It’s not that we moved all of our [on-premises] E-Business Suite customers from on-premise to Fusion. We’ve done some of that, but a lot remains to be done. A lot of these are brand-new customers to Oracle Corporation.”

Ellison went on to say that Oracle has “passed Workday in number of HCM cloud customers.” But that raises the question of whether some numbers might not be the same as other numbers.

As I pointed out a couple of months ago in a piece called Workday CEO: Oracle and SAP Can’t Match Us in Fortune 100, Bhusri laid out some fascinating numbers and competitive claims.

This morning, Bhusri’s about to take the stage for his opening keynote at Workday Rising, the company’s annual customer conference. Please check back tomorrow for more on that.

Is Oracle Triggering a SaaS Revolution?

Disclosure: at the time of this writing, Oracle and Workday were clients of Cloud Wars Media LLC or Evans Strategic Communications LLC.