The three fastest-growing tech companies in the Cloud Wars Top 10 each rang up revenue-growth rates of 41% in the first three months of the year as businesses across every industry are making the cloud the foundation of their digital futures. 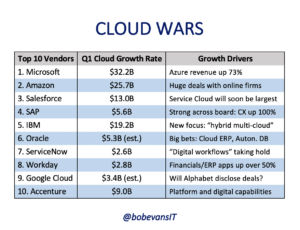 For Microsoft and SAP, hitting 41% is particularly impressive because of the huge base of their cloud businesses.

The world’s #1 cloud vendor, Microsoft, posted commercial-cloud revenue of $9.6 billion for its 2019 fiscal third quarter ended March 31. That gives Microsoft an excellent shot of generating well over $40 billion in cloud revenue for calendar 2019.

For SAP, its Q1 cloud revenue totaled $1.77 billion, including strong results from across the globe led by growth of more than 50% in the Asia-Pacific-Japan region.

Other top performers include consistently high-growth SaaS providers Workday (35.4%) and ServiceNow (34%), both of whom are on target to finish calendar 2019 with revenues approaching $3.5 billion.

Working from a much larger base, the world’s largest SaaS vendor, Salesforce, should hit $16 billion in revenue this calendar year as it relentlessly delivers growth of 25% or more every quarter.

But a big question in the frothy SaaS business is whether Salesforce will be able to maintain that 25%-plus growth trajectory. It’s a question not only because of Salesforce’s increasingly large revenue base, but also as a resurgent SAP attempts to redefine the customer-facing category and snatch market share from Salesforce.

Oracle has reported growth rates well above 30% for some of its SaaS apps. But as Oracle no longer breaks out its cloud revenue from its traditional license revenue, the exact nature of its cloud-revenue growth is impossible to specify.

To me, one of the most interesting growth stories will come later today—well, might come later today—as Google Cloud parent Alphabet releases its Q1 results. About 15 months ago, Alphabet said Google Cloud had completed its first quarter with more than $1 billion in revenue (three months ended Dec. 31, 2017), but since then has offered no specifics on Google Cloud revenue.

Perhaps with new CEO Thomas Kurian having reinvigorated the company’s positioning, strategy and objectives, the parent company will offer some details on just how well Google Cloud is doing in its intensely competitive battles with Microsoft and AWS.

But, as we always say here at Cloud Wars, you can be sure that the biggest winner of all will be the business customers, whose hearts, minds and wallets every single company in the Cloud Wars Top 10 are lusting after.

Disclosure: at the time of this writing, Microsoft, SAP, and Oracle were clients of Evans Strategic Communications LLC.