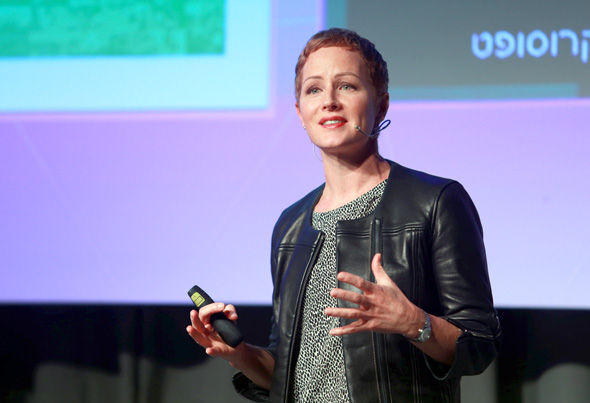 On the heels of Azure’s 76% revenue surge in Q4, Microsoft is seeing a “huge pipeline” for mission-critical SAP apps moving to Azure, along with triple-digit growth in its data-services business and strong ongoing demand for its hybrid-cloud offerings.

As SAP pushes all of its customers to move by 2025 into the cloud with its HANA platform, “We see a phenomenal pipeline around SAP systems moving to Azure,” said Microsoft corporate VP for Azure marketing Julia White at the recent Goldman Sachs investors conference.

White said the SAP push to HANA is part of a sweeping move among businesses to migrate apps and workloads to the cloud to take full advantage of the cloud’s economic benefits, its shorter time to value, and its faster path to innovation.

“The migration pipe is as good as the innovation pipe, and we’ve kind of normalized on that because of the types of workloads,” White said.

“And then within the migration you’re seeing things like SAP—and it’s a huge pipeline—mission-critical systems running on Azure.”

The SAP-on-Azure Phenomenon: The “Huge Pipeline”

I’m fascinated by White’s comments about the “huge” and “phenomenal” pipeline for moving mission-critical SAP workloads and applications over to Azure. Two reasons for that reaction: first, it’s a clear indication that hundreds and perhaps thousands of large businesses around the world have become so comfortable with the cloud that they’re now fully comfortable putting their most-essential production systems in the cloud via Azure.

And second, it’s also the most-powerful endorsement Microsoft could hope to get regarding Azure’s ability to handle some of the world’s biggest, most-complex and—yeah, let’s say it one more time to be sure it sinks in—mission-critical workloads.

Late last year, as I began hearing more and more frequently about this SAP-on-Azure phenomenon, I asked Microsoft a series of questions about these massive migrations: what types of companies, how big, how long does it take, etc. And here’s some of the feedback I received from Microsoft corporate VP for Azure Girish Bablani, with my questions in boldface followed by Bablani’s replies sent via email.

What types of workloads? And in what industries?

“In terms of migration, a lot of these are from legacy NetWeaver-based applications like Business Suite, CRM, SCM, etc. on mostly Oracle, SQL Server, Db2, maxDB or SAP ASE. We also see some migration of  HANA as well. In addition we see lots of customers deploying greenfield implementations of S/4HANA. The customers are spread across all industries. We have globally operating mining companies, airlines, high-tech industry, retail, agriculture industries, etc. An example of a migration is Accenture, which moved its 7TB SAP Hana BW estate from a legacy implementation, and an example of a greenfield implementation is Daimler AG, who did a greenfield S/4HANA implementation on Azure.”

How big are the workloads in these migrations?

“Our customers are running SAP workloads in all sizes. There is a substantial number of larger SAP HANA implementations because of our HANA Large Instance (Bare Metal) offering which supports up to 20TB configuration and TDI v5 configurations of up to 24TB.

“For example, customers like Rio Tinto and Microsoft with SAP Business Suite (ERP) are between 10TB and 16TB using SQL Server. While the database size is a key factor in how we define big, it’s the overall landscape that customers are moving to Azure that is impressive. Rio Tinto has one of the largest implementations of SAP in any public cloud, spanning sandbox, development/testing, quality assurance, pre-production, and production environments. Its SAP estate—which is vital for the company’s enterprise resource planning, financial management, business intelligence, and many other functions—uses two Azure datacenters in Australia with more than 1,000 Azure Virtual Machines, hundreds of virtual networks, and a petabyte of Azure Storage.”

What advantages are those corporations gaining from move to Azure?

Bablani outlined four key advantages: freedom from having to buy and operate hardware; the elasticity of the cloud; engineering agility; and the ability to accelerate digital transformations.

What types of environments are they moving away from: Oracle databases? On-premises systems? Other cloud vendors?

“We see customers mostly moving from on-premises systems and managed private-hosting providers. There are some cases where customers moved from other clouds, mostly AWS and Virtustream. In terms of databases and OS we see different tendencies, such as:

Timing of these migrations: How many months?

“The timing depends heavily on the number of systems, size of the systems, surrounding applications, interfaces into the SAP applications, and ultimately what the customer wants to achieve. We have had customers go live in production within 3 months of starting, to migrations that are staged over 12 months.”