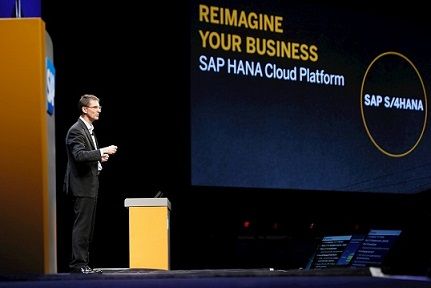 While SAP is rightfully proud that its S/4HANA Cloud ERP business jumped 39% in Q2, Oracle’s competing product grew even faster at 46% for the quarter ended May 31.

While the revenue figures involved here are currently not that large relative to some of the whopping numbers generated in more-mature categories for the Cloud Wars Top 10, there’s no question that the cloud ERP market carries enormous strategic significance for both existing customers looking to migrate to the cloud and for new customers looking to jump into the cloud.

Here are some of the pertinent top-level numbers, and then we’ll get into a more-detailed breakdown:

Oracle CEO Safra Catz certainly believes that’s the case, and last month offered some numbers that seem to fully support her contention. In her opening remarks on a June 15 earnings call announcing Oracle’s fiscal Q4 results for the 3 months ended May 31, Catz—referring to a 3-product set of Fusion ERP, Fusion HCM, and NetSuite—said, “Our strategic back-office cloud applications now have annualized revenue of $4.4 billion.”

And a moment later she offered this perspective: “Our back-office cloud application is not only bigger than our nearest competitor, but also growing more than twice as fast.”

Now, as I said, Oracle doesn’t offer any detail on what portion of that total annualized run rate of $4.4 billion to Fusion ERP, to Fusion HCM or to NetSuite, but I’m willing to bet the lion’s share comes from Fusion ERP.

Again, I do not think that’s how the numbers break out—my estimate (guess) for Fusion ERP’s true portion would be $450 million to $475 million—but in the absence of specific detail from Oracle, we’ll play it safe and go with equal shares of the $1.1 billion Q4 total for each of those 3 product lines.

With that formulation in place, check out the resulting head-to-head comparisons:

SAP S/4HANA Cloud versus Fusion ERP plus NetSuite ERP: This is also a rational comparison to make since it represents the total Cloud ERP business for SAP versus the total Cloud ERP business for Oracle. In this scenario, Fusion ERP plus NetSuite have a guesstimated fiscal-Q4 total of $734 million versus SAP’s $303 million, making Oracle’s total larger by 142%.

So why does all this matter? Well, at least for now, the ERP market is one of the largest enterprise-apps categories and those products play an hugely strategic role in running and analyzing the business operations of a huge portion of the global economy. It’s a very big and important market and will remain so for some time.

My view, which I’ve stated before, is that industry clouds will, over the next 2-3 years, supplant ERP as the foundational enterprise app around which others revolve, but that’s a story for another day. In addition, the pandemic-triggered boom in employee experience makes HCM more vital than ever and has spawned a vast range of new products and subcategories.

And then there’s venerable CRM, which itself has been elevated and expanded as the digital economy has forced every business in every industry to reimagine and revise how it engages with, wins the loyalty of and retains customers.

But back to cloud ERP: it is 100% inevitable that the vast majority of midsized and large corporations will move from traditional ERP to the cloud, and that a lot of small companies will make their first moves into ERP via the cloud.

SAP is the creator of the ERP category and has been, for decades, the king of that category. But the shift to the cloud means SAP has to fight for and win all of its many on-premises ERP incumbents, and CEO Christian Klein is pouring everything he and his company have into that effort.

“We’re seeing strong adoption of our cloud portfolio as customers select SAP for their business transformation,” Klein said in a press release announcing the Q2 results.

“Our strategy is working. This is the third straight quarter of strong execution, and we continue to deliver unparalleled customer value through the strength of our platform and applications.”

For Oracle, chairman Larry Ellison says cloud ERP could easily be a $30-billion category, and he’s stated on many occasions that Fusion ERP is one of two products that will determine Oracle’s future (the other being Autonomous Database). You can read all about that in Larry Ellison Shows His Cards: Oracle ERP Revenue Could Reach $30B.

So this is already a key front in the Cloud Wars, and as the steep growth rates continue, the already-high stakes will only multiply.

We’ll have more on the SAP results over the next few days.