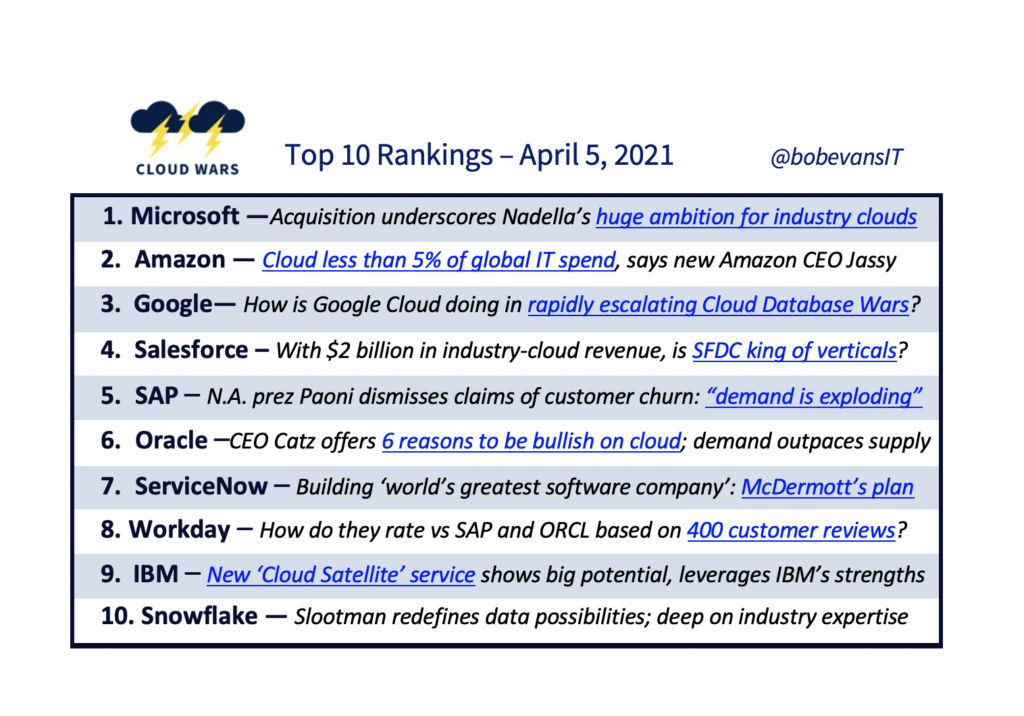 Despite having annual revenue of well under $600 million, high-growth superstar Snowflake has forced its way into the Cloud Wars Top 10 by seizing the data-cloud position that all the major cloud players missed and are now eager to claim.

Snowflake replaces #10 Adobe on my weekly Cloud Wars Top 10 rankings. While Adobe’s Digital Experience enterprise business generates more revenue in a quarter than Snowflake has in its past 12 months, Adobe has failed to become a disruptive or force in the CRM/DX space whereas Snowflake has turned its market upside-down.

For its fiscal Q4 ended Jan. 31, Snowflake’s product revenue jumped 117% to $178.3 million, and it finished the quarter with RPO (remaining performance obligations) of $1.3 billion.

I’ll share a couple high-vision comments from CEO Frank Slootman in a moment, but I’d first like to point out a couple of superb references for anyone looking to understand the cloud database market that Snowflake has rocked:

Now that Snowflake’s a part of the Cloud Wars Top 10, I’ll be adding my own ongoing analyses of the company on a regular basis, and I plan to offer the first of those overviews in the next week or two.

For now, though, anyone attempting to understand more fully the extraordinary impact this company is having should take a close look at these comments made by Slootman on Snowflake’s March 3 earnings call:

One of the key criteria for being on the Cloud Wars Top 10 is ambition: dreaming big dreams, seeing what others don’t see and turning those visions into reality.

And as you can tell, what Snowflake (at least for now) might lack in relative revenue volume, it more than makes up for in bold and customer-centric ambition.

So welcome, Snowflake, to the Cloud Wars Top 10!

Are You Funding #1 Competitor: Amazon? | Ammirati on Innovation