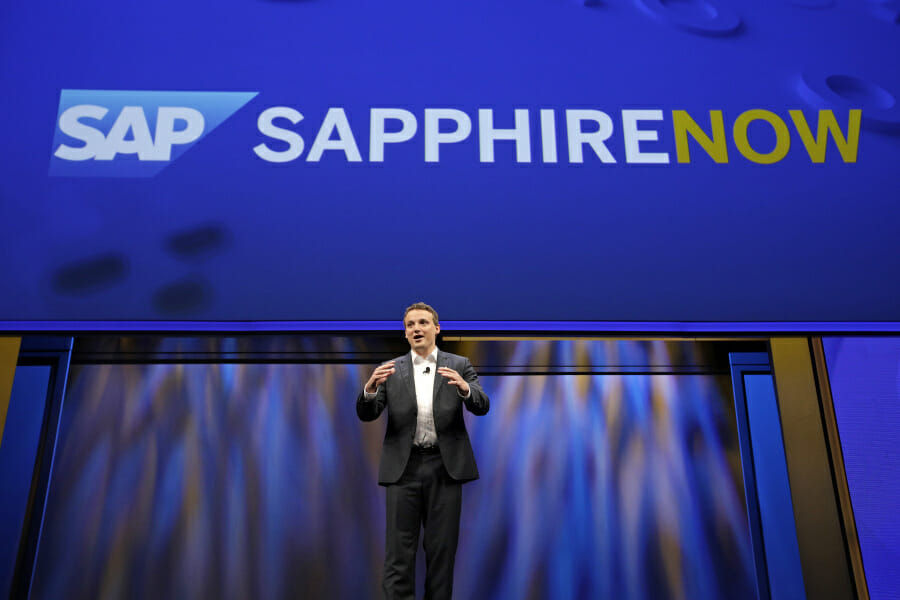 Market capitalizations can be fleeting things—Apple’s is currently at $2.1 trillion—but in spite of occasional flightiness, they provide a fully objective, balanced and unbiased view of how the worldwide market values companies.

So as of about 7:00am Eastern time today, here’s how the global market valued the 3 biggest and most-influential makers of enterprise applications in the world as measured by their market capitalizations:

Let’s explore why these numbers matter in a few different ways.

Perhaps it does if you’re competing with Godzilla. But here in the Cloud Wars, not so much. Oracle has the highest overall revenue by far: its $40 billion in annualized revenue is 25% bigger than SAP’s $32 billion, and 2X as big as Salesforce’s $19 billion. So clearly, overall mass is not the driver of market cap for these 3 companies.

On this measure, Salesforce is the runaway leader because every single piaster of its $19 billion in annualized revenue comes from the cloud. Next in line is SAP, with about $11 billion in annualized cloud revenue. Oracle doesn’t report its cloud revenue, but I’m estimating it at around $9.5 billion to $10 billion. So clearly, Salesforce has earned a 10% premium over Oracle on the strength of its leadership in SaaS. But how do we explain SAP’s pre-eminence in market cap over Salesforce, whose cloud revenue is about 75% higher than SAP’s?

Yes, I realize this is a slightly squishy metric that probably won’t cut it in the spreadsheet world. But this factor gets my vote for the most-important reason why the global marketplace currently values SAP about 15% higher than it values longtime rival Oracle. At stake is the long-term battle for the hearts, minds and wallets of large and mid-sized corporations across the globe as they look to become end-to-end digital businesses and move more and more of their business operations to the cloud.

For the past few decades, SAP has earned and owned the majority of those relationships built on running the most mission-critical processes and workloads corporations in every industry and every part of the globe. Both Salesforce and Oracle have been making massive efforts to rip into SAP’s huge market share, and no doubt both companies will continue to do so with even greater intensity as the stakes soar.

Can SAP meet the cloud requirements of its huge customer base?

This is the singular issue that will determine if SAP can hold its spot as the most highly valued apps vendor relative to Salesforce and Oracle. CEO Christian Klein has set a clear path forward for SAP around his promise to deliver the Intelligent Enterprise for the digital economy. After two or three decades of SAP helping businesses manage huge swaths of their operations, those customer bonds and that customer trust run very deep—can SAP ward off Salesforce and Oracle in taking those customers into the cloud?

What are Salesforce and Oracle banking on?

Salesforce CEO Marc Benioff touts his company’s superiority in giving businesses the ability to lead in the Customer Economy. And Oracle chairman Larry Ellison is betting on his vision of the Autonomous Enterprise built around the Oracle Autonomous Database.

Who will be the ultimate winners?

Everyone who reads Cloud Wars on a regular basis knows the answer to that one by heart. The customers will be the biggest winners—because they will benefit enormously from the innovation and business value generated by the ferocious competition among SAP, Salesforce and Oracle.