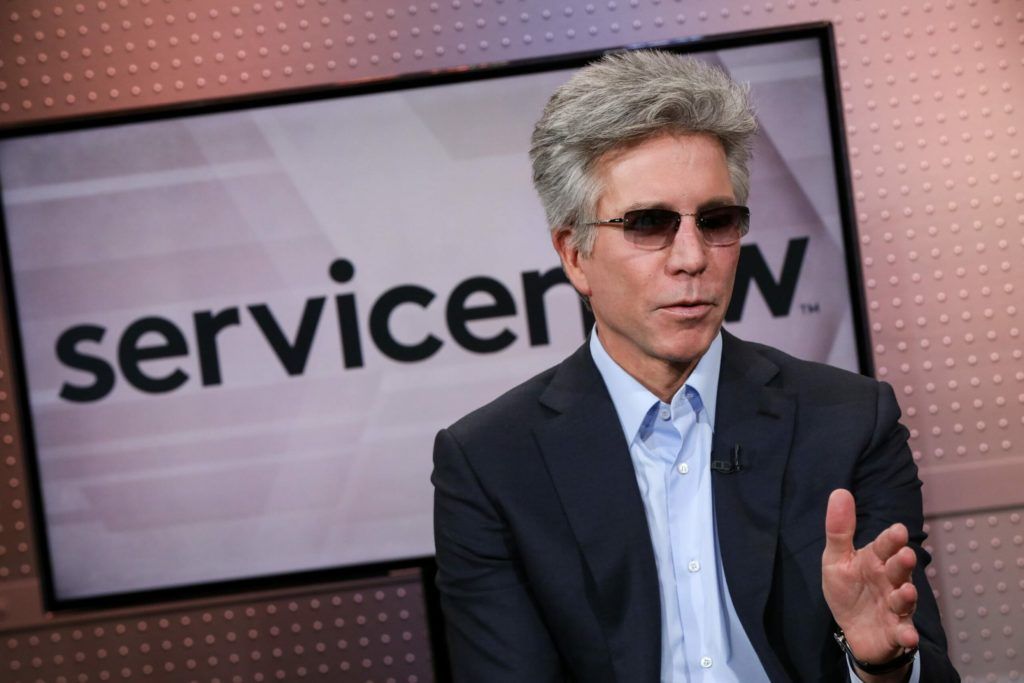 In his inimitably upbeat fashion, ServiceNow CEO Bill McDermott has in just four months immersed himself in the wonky worlds of ITOM, CSM and SAM and turned those into top-priority strategic themes that CEOs are finding simply irresistible.

ServiceNow, which late last year lured McDermott away from SAP, is certainly no stranger to steep growth and raves from customers. But under McDermott, the company is clearly undergoing a sweeping transformation as he repositions it from quirky outsider to indispensable and mainstream enterprise essential. (For more on that, please see ServiceNow’s Big Secret: Bill McDermott Redefining Software Business.)

And ServiceNow’s outlook for Q2 and the full calendar year reflect a continued bullish outlook:

“We will not slow down.”

In commenting on ServiceNow’s Q1 performance and its potential for the rest of 2020, McDermott deployed his trademark full-court press from beginning to end.

“We never stopped pushing. We will not slow down… We delivered a strong Q1, beating guidance and consensus. We have shown we can deliver.”

Some people—foolishly—have over time tried to attribute McDermott’s enthusiasm, optimism and complete transparency to little more than a super-salesman’s schtick without much intellectual firepower behind it.

But the results McDermott has delivered time after time show that the shallow observers fully own any problem about a lack of brains. Because McDermott certainly doesn’t have that issue. His take on what’s going on in today’s crazy marketplace sounds pretty smart to me.

“Behind every great experience is a great workflow.”

“Cloud consumption stayed high as customers relied on the Now Platform as a workflow workhorse. Around the world, we see that customers who are farthest along in their digital transformations are better equipped to manage this crisis,” he said on the earnings call.

“Companies lagging behind are realizing that they now have a burning problem: accelerating digital transformation has become a business imperative. And behind every great experience is a great workflow. Today, that matters more than ever, and the power of the Now Platform has become self-evident to customers in this pandemic,” McDermott said.

“They are leveraging the Now Platform to quickly deploy workflow apps that enable better crisis management and business outcomes.”

A transition of CEOs and dispositions

The opening atop ServiceNow came when its former CEO, John Donahoe, took the CEO job at Nike.

And while ServiceNow under Donahoe always delivered solid financial results, I got the impression from Donahoe that he would have preferred the title “temporary CEO.” He always reminded me of the type of person at a cocktail party never really hears a word you say because he’s always looking over your shoulder to see if there’s someone more interesting he can jump to.

Conversely, McDermott gives every impression of being wildly infatuated with ServiceNow: its 11,000 people, its unique and (formerly!) unsexy products, its customers and its potential to grab an outsized chunk of that $7.4 trillion opportunity he mentioned.

Look at what he said about each of those groups:

“In March, as the pandemic was being felt everywhere in the world, our more than 11,000 employees seamlessly transitioned to a work-from-home environment. I’m so incredibly proud of how ServiceNow employees adjusted. Our team focused, they executed, they delivered. Employees feel motivated, inspired and proud.

“After shifting to work from home, we held our biggest all-hands company meeting ever, a live, global, digital event where we laid out our plans to support each other and to serve our customers… ServiceNow employees are ready to lead. We’re strengthening the amazing purpose, culture and character of our company. We are aware of the hard work ahead. We are taking nothing for granted… This is an innovation-led company with an incredible team. We have a proven track record and an unwavering commitment to customer success. Ladies and gentlemen, if it can be done, ServiceNow will do it. We are on the move!”

“You can’t go to any meeting where a CEO isn’t in some way trying to digitize their company and trying to make sure that digital transformation is at the top of their to-do list. Because they know if they’re not digitally transformed and their competitors are, they’re going to get wiped out. So this is where the action is.

“We’re in the sweet spot, and we don’t have to sort of explain that. ServiceNow is hitting the main stage with the biggest companies in tech, and we have a very prized position because the problem with systems of record and the technologies of the past is they do one thing well in a specific domain. It’s not that that’s unimportant, but those investments have been made. So the CEOs that I talk to want us to help make those investments work better. And that’s where the platform of platforms comes in because we’re so well positioned to take all the investments they’ve already made and enable them to do what they want done which is to create workflows that inspire their people and provide outstanding service to their customers!”

“The loyalty effect is getting even stronger because customers really are relying on the platform even more. And as I look at the root causes of why companies win and lose, customers have to love that product in good times and in bad and be willing to stick with that product because they really believe it’s essential to their future. And that has been the case in every engagement, even the ones where customers needed our help the most.”

“We had 37 deals greater than $1 million this quarter—that’s up 48% year-over-year. In fact, most deals closed in the final weeks of March, consistent with normal linearity. Our renewal rate remained best-in-class at 97%…

“Lowe’s Corporation was facing a surge of emergency paid leave request due to COVID-19. Within 96 hours, they built a mobile leave request app on the Now Platform and deployed it to 330,000 employees… 18 of our top 20 deals with companies such as Merck, Humana and Siemens included three or more products. This included our second-largest new-customer transaction ever, which was signed with a Fortune 50 leading U.S. insurance company… We landed our largest CSM deal ever in APJ. Japanese-based Murata Manufacturing purchased CSM to enhance their customer support, reduce time to resolution and increase customer satisfaction.”

“One of my goals is to be the trusted innovator for the C-suite and actually to elevate the level of contact that ServiceNow utilized in the marketplace,” McDermott said during the Q&A session as he made a startling disclosure.

“Right now, C-level executives and CEOs in particular are easier to get to than they ever have been because they’re in their home office and they’re looking for a good phone call or a good Zoom. And in ServiceNow, they’re finding one.

And at the top of many customer-priority lists is reconfiguring supply chains.

“I want everybody to just think about the old value chains and how they are splitting apart and being reassembled into these end-to-end, mobile-first workflows on the Now Platform and how quickly you can get to value and just how willing people are to engage digitally.”

But what it does create is modern digital workflows—and that capability, McDermott says, is snatching the attention of CEOs across every industry.

“Our pipeline is bigger than it was last April.”

“Digital workflows are becoming a substantially important asset within every company. And the great experiences that every CEO wants for their employees and customers includes mobile, web and conversational tools. We see clearly that the IT workflow is also essential to enable employee workflow and customer workflow,” he said as he put ServiceNow in the center of digital transformation.

“And what I see happening is companies are telling me, ‘Why would I want to double down on a system of record when I can take the data from the system of record and put it into a new workflow?’ ”

Okay, so it’s one thing for the CEO of a software company to say that. But do the everyday realities in today’s harsh marketplace match up with those comments? Check out what ServiceNow had to say about how business was throughout most of April.

“From a linearity basis, March closed as we would expect March to close, and April has actually started faster than April did last year,” McDermott said.

“So on a year-over-year basis, our pipeline is bigger than it was last April. And what we actually have in the door is, on a percentage basis, higher than we had last April.

“And the forecast is not shaky. It is very solid when you talk to our sales leader, the executives that report into him, and you participate in the daily conversations in the trenches like I do with people that run companies and run government entities. “So right now,” said McDermott in summing up his first four tumultuous months, “things are going very well at ServiceNow.”