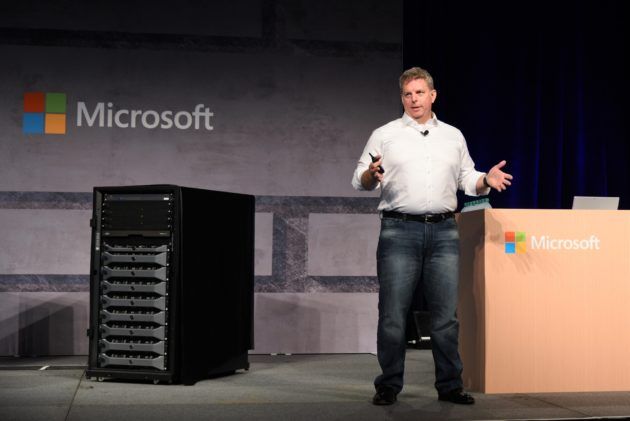 With Microsoft on pace to generate $50 billion in commercial-cloud revenue in its current fiscal year, it was fascinating to hear a top Azure executive describe how Microsoft’s been able to land some billon-dollar or $500-million cloud deals recently.

We got a preview during Microsoft’s fiscal-Q4 earnings call on July 18. That’s when CEO Satya Nadella referred to one of those megadeals—the one with AT&T—as “the largest commercial deal that we’ve signed.”

Even more telling is that Nadella followed up that bracing revelation with another stunning statement. “We have line of sight to many more such deals,” Nadella said.

We’re talking about cloud deals of upwards of a billion dollars or perhaps even more. So just what does the word “many” mean in his comment of “many more such deals”? 3 more? 10 more? 20 more?

Whatever the precise number, this is a staggering achievement. Certainly an achievement for Microsoft, but also for the broader trend of global corporations coming to fully accept and even demand rapid shifts to the cloud.

Earlier this month, Microsoft executive vice-president Jason Zander revealed some of the approaches that big global customers are taking with Azure cloud deals—deals that are now calculated in many hundreds of millions or perhaps even a billion dollars or more.

His comments came a Deutsche Bank investors conference earlier this month. Zander was pressed by Deutsche Bank lead technology analyst Karl Keirstead to explain what these megadeals entail. Without going into specific detail, Zander described high-growth opportunities in terms of “floodgates” and “hockey sticks” and “all of a sudden, a few become hundreds.”

Referring to the AT&T deal, Keirstead framed his question by saying that Nadella had, during the July 18 earnings called, noted that “he’s got sort of line of sight to more of them.” Keirstead went on, building to his final question:

So I think the ones that Microsoft has talked about is you’re public with AT&T, and I think Chevron, Walmart and Walgreens are a couple of the other big ones… It feels like that’s a big change, where in the last six to nine months, we’re seeing not $50-million or $100-million deals drop, but we’re seeing like half a billion to a billion-dollar multi-year deals drop? Is there any unique catalyst for those big deals starting to happen? Because it’s a clear shift in the last quarter or two.

What is triggering these megadeals?

Absolutely. I think you’re starting to see us deployed for this type of technology, increasingly in tier one workloads, the things that are the most core to a business. We do do a significant amount of work when it comes to the back office, you know, IT and other work like that, as well. But if you look at these kind of tier one workloads, they run the business itself.

So generally, when you see those very large deals, you’re seeing us also integrate and supply technology and partner very deeply with that.

But when you start seeing the much larger deals, you’re seeing a more strategic integration of our technology capabilities and skillsets going along with these partners, which they’re world-class in their space, as well. And you put those two things together, that’s super important.

In addition to the shift of mission-critical workloads to the cloud, Zander cited on a few different occasions the growing tendency among big companies to embrace the cloud for what he called their “innovation agendas.”

“I think you’re also seeing us land quite a number of very large, kind of megadeals. You’ve seen us do the announcements, top Fortune 50 companies that, again, are looking at Microsoft as their trusted partner to be able to carry forward their innovation agenda as well,” Zander said.

But in most cases the work starts around efficiencies, agility and flexibility. Zander went on:

However, if you look at the bulk of our business, it is highly focused around a lot of the work we do with enterprises. And those circumstances, as you mention, they’ve got existing workloads. They’ve been running them in their own datacenters or leased datacenters for a long time. They want to have a better position on their capex, and again, they want the agility associated with that.

So, it’s very frequent that we’ll start off by doing some level of migration. How do I take the existing workloads and get them into the cloud? I get more efficiency, I can run it more cheaply, I can get the agility in there.

Once that foundation is in place, Zander said, the magic can begin to happen.

‘A few become hundreds, and the hockey stick just kicks in’

“And then we move into the innovation. I actually think that Chevron, a top Fortune 50 company, fantastic partner, very forward-leaning company, and we started the same way. We did essentially kind of your enterprise-control plane, the software agility so that their engineers could move quicker, and to start off, just a few workloads. And then, all of a sudden, a few became hundreds, and the hockey stick just kicks in,” Zander said.

And once we got there, we started doing more innovation, to the point where we’re doing IoT for upstream oil and gas exploration, looking at seismic and other things, as well. So again, moving beyond kind of like your SAP portfolio and a bunch of those things, which were the first round, into this kind of innovation cloud.”

Another major driver for large customers to dig in more deeply with Microsoft and Azure has been the need to upgrade the talent level of their IT teams and/or boost their technical proficiency around the latest cloud technologies and capabilities, Zander said.

“One that’s really interesting—and this was the case with Chevron—there’s a lot of companies that also want to work on the skilling for their own personnel. You could come in and have a partner or Microsoft help you move stuff very quickly, but if your personnel have not yet come up to speed on how the cloud operates, they can’t take full advantage of it.

“So in some cases you actually want to work with them along the way so they become cloud-skilled and they know how to move fast,” Zander said.

“But I can tell you, once you start opening the gates on this stuff, man, it’s a hockey stick. The floodgates just open,” Zander said.

“When the first few workloads go, and you’ve got people that are trained and they know how to do it, all of a sudden, they’re kind of like, ‘Why isn’t the rest of this stuff running here?’

“And we see the usage start to spike.”