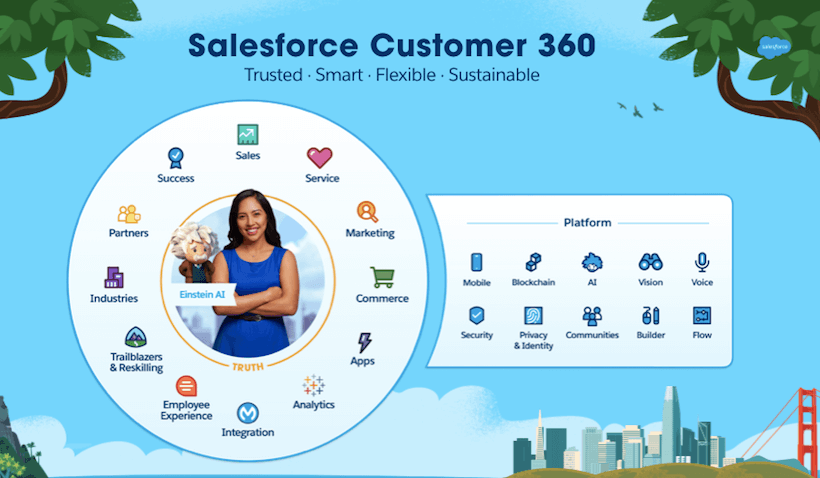 Several months after refocusing his entire company around its ‘Customer 360’ strategy, Salesforce CEO Marc Benioff now says the Tableau acquisition is transforming Customer 360 from a unified data approach to a decision-making engine.

In Salesforce’s dazzling Q4 earnings release that featured not only blowout financials but also the unexpected departure of co-CEO Keith Block, I was struck by Benioff’s description of the impact Tableau’s having on the entire company.

Now, it’s hardly unusual for Marc Benioff to be effusive about his company’s achievements and aspirations. But his comments about Tableau’s transformative effect on Customer 360 and the company at large were exceptional even by Benioff’s standards.

And I think his comments are a clear signal about the direction he’s plotting for Salesforce as he spurs the company to double its revenue from $17 billion to $35 billion over the next 3 years.

Moving “From Data to Decisions”

Soon after mentioning Block’s departure during his opening remarks, Benioff began describing Customer 360 and its centrality to all of Salesforce’s clouds and related services.

“What makes Customer 360 so powerful is that it unifies and manages all the data not just within Salesforce, but from almost any data source to deliver a complete 360-degree view of your customer,” Benioff said.

“It’s a single source of truth that results in one-to-one journeys for customers across retail stores and commerce sites, email and messaging, call centers and field service. In fact, across every customer interaction and every industry, Customer 360 is the only platform delivering this unique capability, enabling the single source of truth.”

Then Benioff described the transformational role that Tableau is having on that top-level strategy.

“And now, with our recent acquisition of Tableau, we’re turning Customer 360 data into actionable insights that are available to every user, helping them to move from data to decisions.”

That aspiration fits perfectly with Benioff’s ongoing evangelism about the primacy of the customer and the need for businesses to find new and better ways to create superb experiences for their customers.

But I find it surprising that Tableau has already made such an impact on a company as big, fast-moving and focused as Salesforce.

Benioff himself said that in the very short time since Tableau officially joined Salesforce—the $15.7-billion deal closed 7 months ago—he’s been shocked by the level of customer demand for Tableau’s products and services.

“I’m especially excited by the success of Tableau and how well we’re doing together,” Benioff said in his opening remarks. “It’s clear that customers recognize Tableau’s value in helping them see and understand all the data in Customer 360 throughout their whole enterprise.”

Benioff’s praise for Tableau’s big and rapid contributions grew even more fervent during the Q&A session.

“I would say that from a customer perspective, I have never had so many customers come to me about an acquisition and immediately tell me that they want to go enterprise-wide with it,” Benioff said.

Block added that in Salesforce’s fiscal Q4, Tableau won “significant” deals with “three of the world’s biggest brands in the internet-and-retail spaces, two of which are at the top of the Fortune 100.”

Benioff later appeared to have some ideas for how Tableau can accelerate the big momentum it’s already been generating via its unique public.tableau.com site.

Benioff admitted that he’s been surprised at the “incredible level of innovation and size and scale of [Tableau’s] community” around that site, where a visitor is greeted with this message: “Your data has a story. Share it with the world. Visualize and publish data on topics you care about. Explore and be inspired by creations from like-minded data enthusiasts.”

With all that data telling all those stories, could that present Tableau and Salesforce with a new revenue opportunity?

“I think there’s another opportunity for them to monetize that in a more-aggressive way and to build a place there for ISVs,” Benioff said. “I think maybe we have that part figured out.

“So I’ve been encouraging them to take that next step.”

That step, plus the many others that Tableau’s taken during its brief time as part of Salesforce, are surely why Salesforce agreed to pay that whopping 40-times-revenue price for Tableau.

And it looks like that $15.7-billion bet is beginning to pay off nicely as Salesforce prepares to take Customer 360 to an entirely new level on the strength of Tableau.