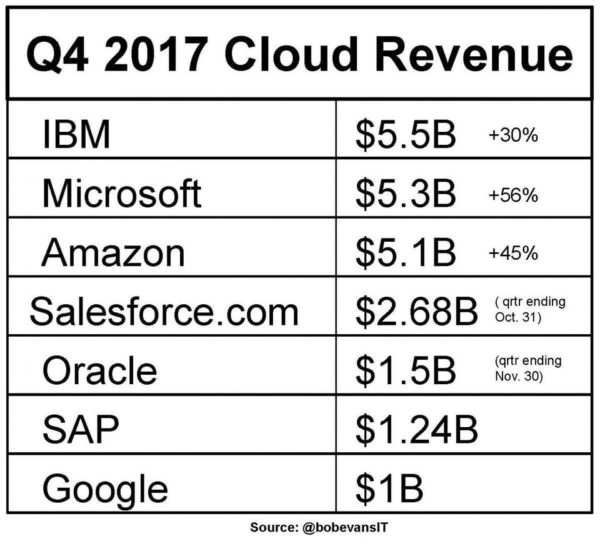 With the three largest enterprise-cloud providers—Microsoft, Amazon and IBM—all closing in on $20 billion in trailing-12-month revenue, it’s sometimes difficult to bear in mind that we are only in the very early days and opening skirmishes of the Cloud Wars.

One of Microsoft’s top Azure execs described it to me the other day this way: if you think of the enterprise cloud market as a bell curve, with the early adopters making up most of the flattish part on the lower left out in front of the big fat part in the middle that will follow, we are only just beginning to move into that big middle part!

While many factors are driving that enormous growth, the visionary and bold moves by the three biggest enterprise-cloud vendors noted above—in AI, in blockchain, in analytics, in edge computing, in hybrid computing, in developer tools and integration services and machine learning and more—are having a disproportionately large impact on business customers’ acceptance of and eagerness for the cloud.

So let’s take a look at where Microsoft, Amazon and IBM stand here in early April as each prepares to release and discuss Q1 results later this month: IBM on April 17, and Microsoft and Amazon on April 26. 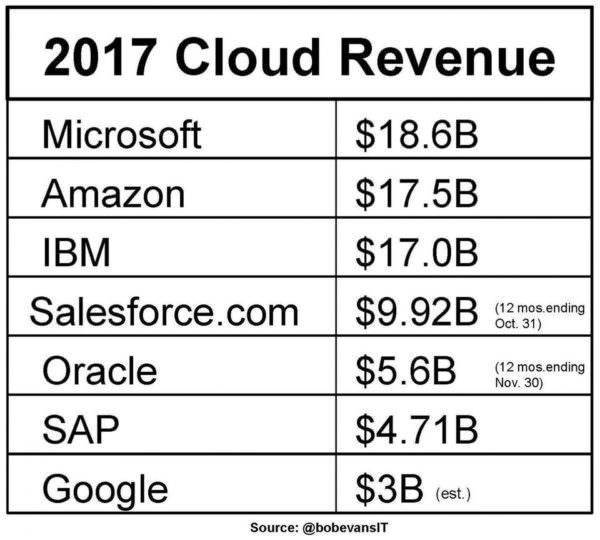 As I’ve noted before, I make absolutely no pretense about being a financial analyst or of being able to present rigorously analytical forecasts of those upcoming results. Rather, I’m going to focus here on where and how each of those three companies will attempt to position itself as the Cloud Wars move into that “big fat middle part” of the bell curve.

Microsoft. With calendar-2017 commercial-cloud revenue of $18.6 billion, Microsoft was without question the world’s largest cloud provider for the enterprise in 2017, ahead of Amazon’s $17.5 billion for the same period and IBM’s $17.0 billion. And while both Amazon and IBM delivered very impressive cloud results throughout last year, and are showing every indication of carrying that momentum forcefully into 2018, Microsoft is firing so well on so many parts of its cloud business that it’s hard to imagine anyone overtaking it in Q1 or for full-year 2018.

Here are some of the reasons why I feel that way:

Amazon. The undisputed category king in public-cloud IaaS continues to rack up impressive gains in revenue, customers, and PaaS expertise—in fact, it recently revealed that more than 1 million customers are using its cloud solutions. And a few months ago, Andy Jassy, the CEO of Amazon Web Services, went so far as to tell CNBC that he thinks Amazon could become not only the biggest cloud provider in the world but indeed the largest enterprise-tech company on the planet: “I think if we’re able to deliver the right type of customer experience, and continue to build what customers ask us over time, then as the market moves more and more toward cloud, I think we have the chance to be the largest enterprise company in the world.”

Well then—if thinking big is an essential part of success in the cloud, then Jassy and Amazon are in great shape on the big-aspirations front! However, it’s the execution side that’s likely to prove much more challenging because, for as great as Amazon has been in the IaaS space and for as much as it’s leaning hard into security and AI and machine learning and many other high-potential services, it is still primarily a one-trick pony in the cloud, whereas arch-rivals Microsoft and IBM play broadly and deeply at all 3 layers: IaaS, PaaS and SaaS.

And as software and data become the primary forces of business advantage and competitive differentiation for businesses across every industry, the cloud vendors that have the greatest enterprise-software capabilities over the longest period will likely the biggest winners—a dynamic I discussed in some detail a while back in a piece called Sorry, Amazon, But Microsoft Is The World’s #1 Cloud Vendor—Here’s Why.

IBM. In a development that surprised some and shocked many others, IBM emerged in the middle of last year as one of the three largest enterprise-cloud providers. In a segment of the business that some think is only for fresh-faced cloud natives, IBM has parlayed its power of incumbency among the world’s largest global corporations with some sharp acquisitions and ongoing organic development to build a $17-billion cloud business.

Does that surprise you? If so, then this one might shock you: as you think ahead about the Q1 results for the leading cloud companies, bear in mind that in Q4 of calendar 2017, the tech company with the most enterprise-cloud revenue was not Microsoft, was not Amazon, was not Salesforce, and was not Google—it was IBM, with $5.5 billion in cloud revenue for the 3 months ending Dec. 31.

I can say with 99% confidence that that is the most revenue that any commercial-cloud vendor has ever produced in a single quarter—and that was done by IBM.

While IBM’s $10-billion “as-a-service” cloud business—IaaS, SaaS and PaaS—generated more revenue in 2017 than any cloud vendor except Microsoft and Amazon, that’s only part of IBM’s cloud story. Leveraging that power of incumbency earned over decades of achievement and trust with the world’s biggest companies, IBM also has a $7-billion cloud unit that I call its “cloud conversion” business, wherein IBM uses its cloud and other technologies and services to help those clients convert legacy systems and software into cloud and cloud-compatible environments.

No other cloud vendor has anything close to that, and given that we’re about to hit that “big fat middle part” of the cloud-market bell curve, IBM will be sure to have plenty of opportunity to continue surprising—and even shocking—people with its well-earned position among the world’s top cloud powerhouses.