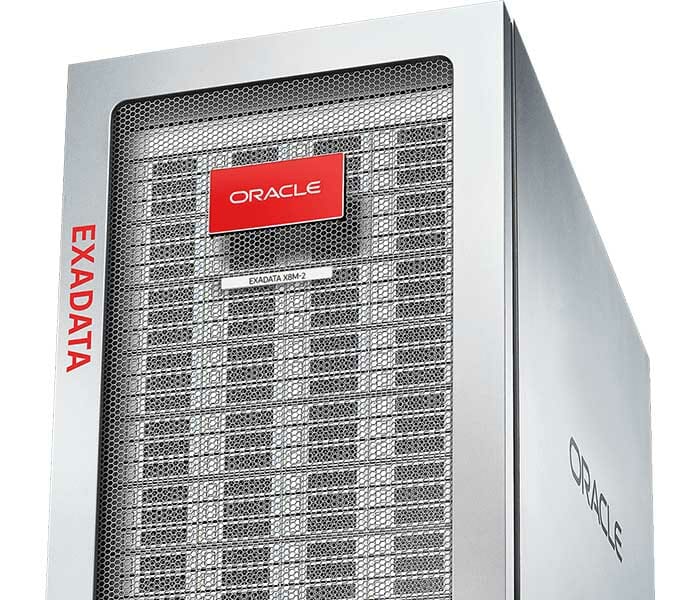 Oracle has pointedly and publicly called out AWS by claiming Oracle’s new Exadata Cloud Service X8M crushes competing services from AWS and by sharing new stories about customers that have achieved striking results with Exadata.

With this frontal assault on a competitor that currently holds a vastly greater share of the huge cloud-infrastructure market, Oracle wants to prove in head-to-head comparisons and via real-world customer stories that its database cloud services can not only outperform AWS but are less expensive as well.

On the customer side, Oracle said that the 3 largest telcos in the world and the 2 largest logistics companies are already using Exadata Cloud, and that 97% of the Fortune Global 100 depend on Oracle Database today.

That statistic—97% penetration right now among the Fortune Global 100—stands in stark contrast to AWS claims about big organizations moving off of Oracle.

And on top of showcasing a wide range of high-performance Exadata customers, Oracle also showed some head-to-head-comparison slides that demonstrate an extraordinary superiority over comparable database cloud services from AWS. 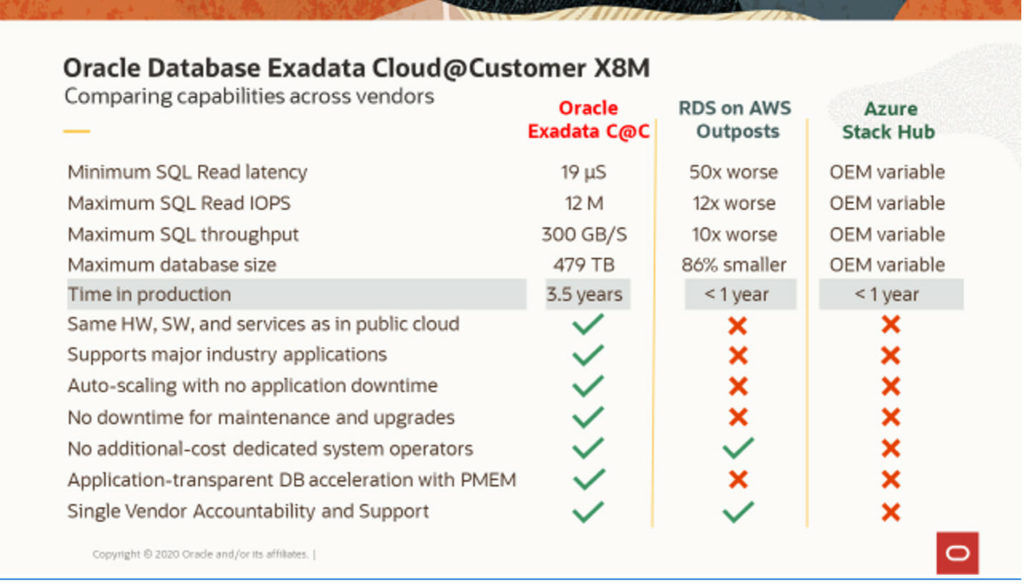 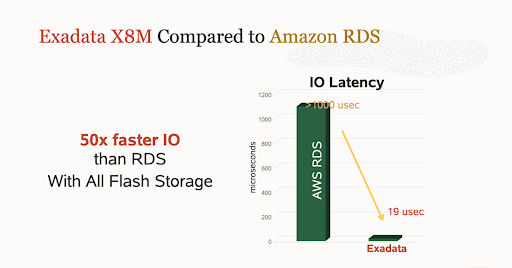 And then, on a comparison of scaling, Exadata Cloud Service X8M versus both RDS and Aurora: 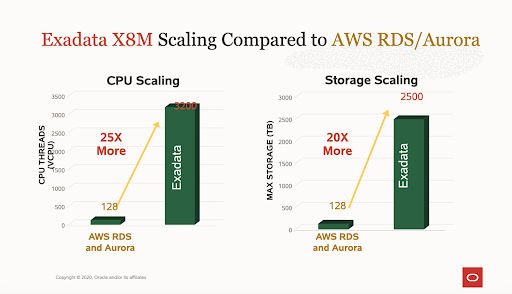 Beyond the claims and comparison charts, the Oracle press release accompanying the announcement offered these comments from leading industry analysts:

Two customers cited by Oracle were even more bullish around the topics of cost savings (both about 35%), cloud-to-on-premises flexibility, and performance gains of up to 3X.

Burns and McDonnell, a $4-billion design and construction firm, said, “With Exadata Cloud service we’ve been able to reduce costs by 35% and seamlessly move databases from on-premises to cloud with Exadata’s architectural identicality.”

And Manappuram Finance Ltd., a $2-billion financial-services company based in India, said, “We anticipate 30% to 40% in cost savings over the next 5 years and performance improvements in the range of 2X-3X over what is available currently.”

For Oracle, the biggest thing the new Exadata Cloud Service X8M cloud service has going for it is that while it’s relatively new to the cloud—2016—Exadata has a long and impressive record in demanding business environments.

The two I found to be most intriguing were from telecom giant Docomo and from technology leader Samsung.

Those examples of breakthrough Exadata performance in the on-premises world plus the enhanced capabilities of this new cloud version of Exadata underscore the vastly different approach to infrastructure that Oracle has taken versus those chosen by AWS and IBM.

When Oracle acquired Sun Microsystems in 2009, it marked the end of the company focusing solely on software (databases and applications) and the beginning of Oracle’s move into infrastructure. Through innovative source-code engineering, Oracle created the Exadata Database Machine to deliver unprecedented capabilities to businesses using the Oracle Database including

What began as a strategy to boost Oracle’s market share in traditional infrastructure has strategically evolved into Oracle’s ability to deliver an architecturally identical offering across both cloud and on-prem environments. As a result, business customers can move databases and applications from on-prem to cloud and vice versa without needing to make expensive and time-consuming changes and modifications—something no other major vendor can match.

While IBM has its DB2 database and high-end Power servers, IBM has not been able to achieve that architectural equivalence across cloud and on-premises systems.

AWS, realizing that the on-premises market is not going away for at least the foreseeable future, attempted to bridge that yawning gap in its capabilities by creating on-premises versions of its general-purpose IaaS services. Tellingly, AWS referred to these systems as AWS Outposts. So while customers continue to use on-premises technology to run essential, mission-critical, or highly regulated workloads, Amazon refers to them as “outposts”—isolated and tactical components out on the far-flung fringes.

In spite of that attitude toward on-premises workloads and the technology that supports them, AWS has, through its success in the cloud, earned the right to be considered along with Oracle as serious contenders for leadership in the database cloud market.

So with IBM not presenting much of a competitive threat, Oracle is focusing its efforts in the database-cloud market on comparisons with AWS, showcased by its very public calling out of AWS noted at the top of this article.

So the ball would seem to be in AWS’s court.

If it chooses to ignore Oracle’s challenge and instead decides to reveal its own performance capabilities relative to Oracle’s, I’ll be eager to present those in a side-by-side comparison.

And if AWS decides to address the Oracle challenge directly, then whichever company comes out on top, the biggest winners will surely be the business customers that stand to gain enormously from the fierce competition between AWS and Oracle.

Meanwhile, we’ll also keep you posted on what IBM decides to do with its struggling infrastructure business.