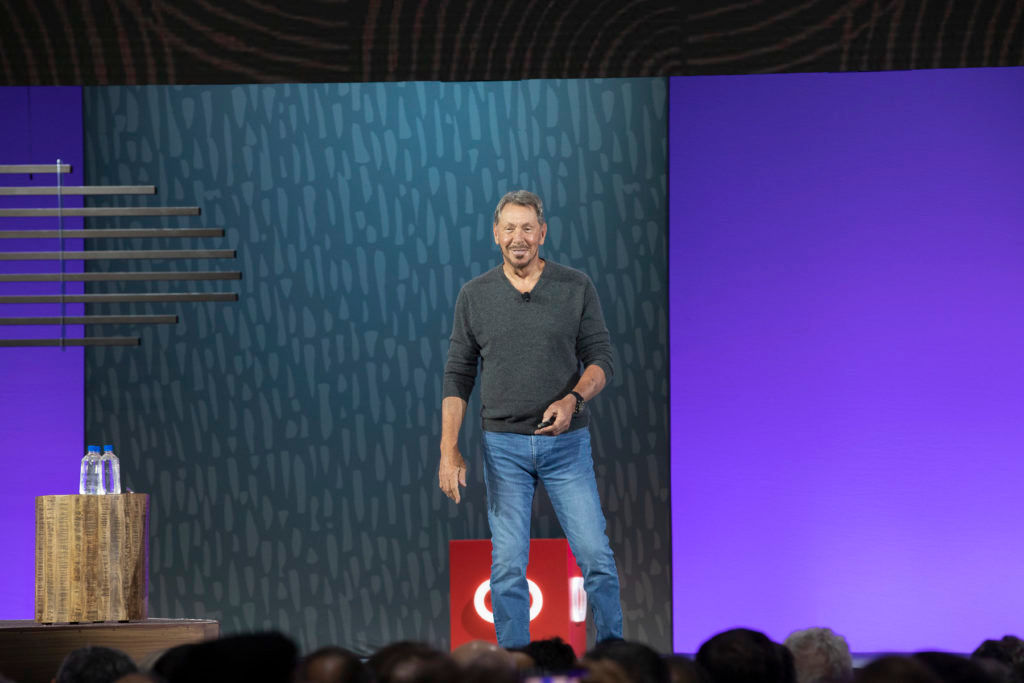 Outlining two developments that could tip the balance of power in the cloud, Oracle founder Larry Ellison announced this week at OpenWorld that Oracle is expanding its groundbreaking partnership with Microsoft and promised to vault past Amazon in a key infrastructure category.

The broader and deeper relationship between Microsoft—the longtime #1 vendor in my Cloud Wars Top 10 rankings—and Oracle—which recently moved up to #5—is enormously important. Above all, because it allows business customers to more quickly and easily integrate cloud services that each company offers.

In addition, the unlikely but high-value partnership will probably trigger other unexpected alliances among the major cloud providers. We are seeing customer requirements increasingly take precedence over competitive rivalries within the cloud community.

The Oracle-Microsoft partnership is indeed “unlikely.” Because while Microsoft CEO Satya Nadella has demonstrated a wide-ranging willingness to pair up with rivals to unlock new customer value—think of the deals with Adobe, SAP, and now Oracle—Ellison’s company has always taken the rugged-individualist approach.

But the potential value of tying in closely with Microsoft’s booming Azure cloud business and the resulting competitive advantage the two companies can wield versus mutual rival Amazon combined to convince Ellison and Nadella to find high-value ways to work together. (Amazon sits at #2 on my Cloud Wars Top 10 list.) 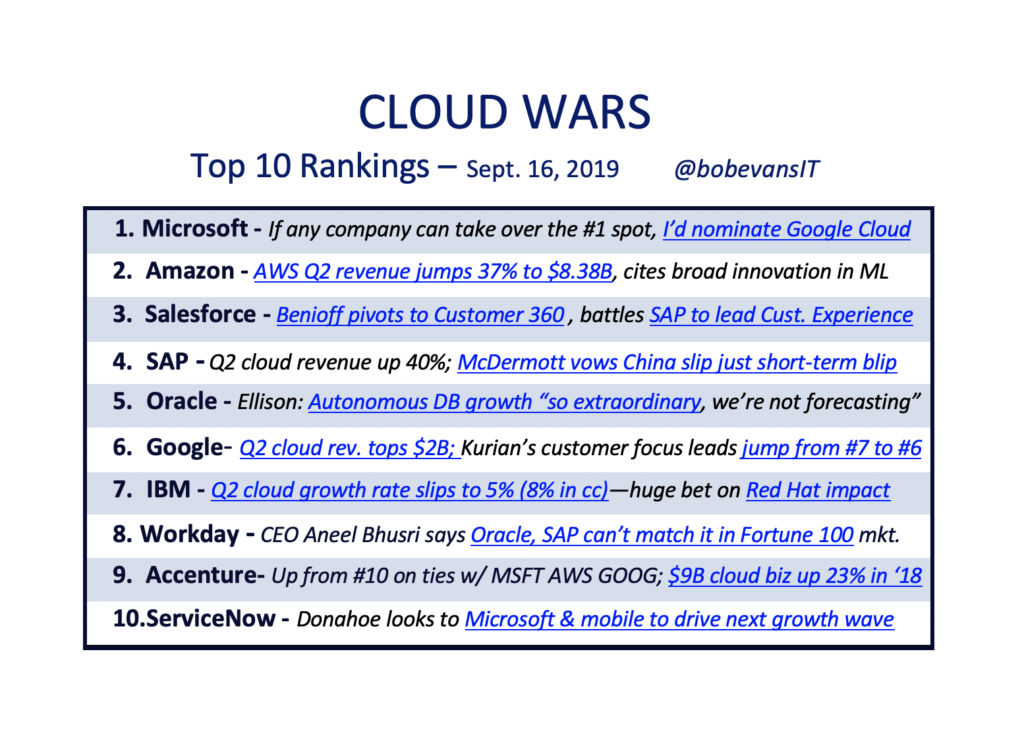 At the same time, Ellison—never one to shy away from a high-stakes battle—promised in his OpenWorld keynote that within the year, Oracle would surpass Amazon in number of cloud-availability regions around the world. While at this point that is nothing but talk, it could prove to be be a big credibility-booster for Oracle’s cloud-infrastructure if Ellison’s able to pull it off.

As Ellison touted the rapidly expanding capabilities of the Oracle cloud, he specifically cited his company’s “great relationship” with Microsoft. The Oracle founder offered a simple but profound vision of the new business value it will unlock for customers.

Praise for Microsoft from Ellison at OpenWorld

“You get to choose any of the Microsoft technology, any of the Oracle technology—mix and match,” Ellison said.

Warming to his task of showcasing the unique capabilities that Microsoft and Oracle expect to unleash for customers, Ellison continued: “They have a high-speed interconnect. Microsoft Analytics are going to work great on top of the Oracle Autonomous Database because we’ve got the high-speed link and, I think, a great relationship with Microsoft.

“And Microsoft has a lot of good technology,” said Ellison in a comment that, a year ago, would have been inconceivable. And he followed it with another in that same category. “So we now have Microsoft SQL Server in our Gen 2 Cloud in our expanding partnership with Microsoft.”

While the strategic and expanding partnership with Microsoft is remarkable, Oracle is also extending the same hand of cloud-openness to other tech vendors, Ellison said.

“We have a marketplace that lists all of these third-party applications,” Ellison said.

“And we have lots of them, with lots more coming. In addition to that, we have some very special partnerships like with Microsoft where we’ve actually created a high-speed link to connect our data centers to Microsoft’s data centers so that you can be using the Oracle Autonomous Database with Microsoft Analytics if you want to.

In the case of Microsoft, the agreement by the two companies to expand the number of data centers that offer this high-speed interconnection across their respective clouds underscores Oracle’s new outlook.

And speaking of cloud infrastructure, Ellison dropped a blockbuster comment about Oracle’s rapidly expanding IaaS capabilities when he made a striking claim about how his company will stack up against IaaS leader Amazon just 12 months from now.

Showcasing Oracle’s 16 hyperscale cloud regions across the globe, Ellison said, “This will be one of the most surprising slides I put up, because when we meet next year on this, we’ll have more regions than AWS.”

Will that startling claim hold up over the next year? Maybe and maybe not. But perhaps the larger point Ellison was making is that his company intends to become a major player in the IaaS layer of the cloud, a segment that Amazon has created and dominated and in which Oracle to date has been at best a bit player.

Here’s the broader context for that striking promise from Ellison.

So we have 16 hyperscale regions around the world today. And all the Oracle regions run all the Oracle services. So in all 16 of those regions, you’ll find NetSuite. In all 16 of those regions, you’ll find Fusion applications. In all 16 of those regions, you’ll find Oracle Analytics Cloud in addition to obviously the Autonomous Database and compute and storage and all of that jazz… So, this is what it looks like today—16 hyperscale regions. This will be one of the most surprising slides I put up, because when we meet next year on this, we’ll have more regions than AWS. It’s stunning—it’s absolutely stunning. We expect to add more than 1,000 Autonomous Database customers this quarter alone, and it’s accelerating. It’s absolutely amazing, what’s going on.