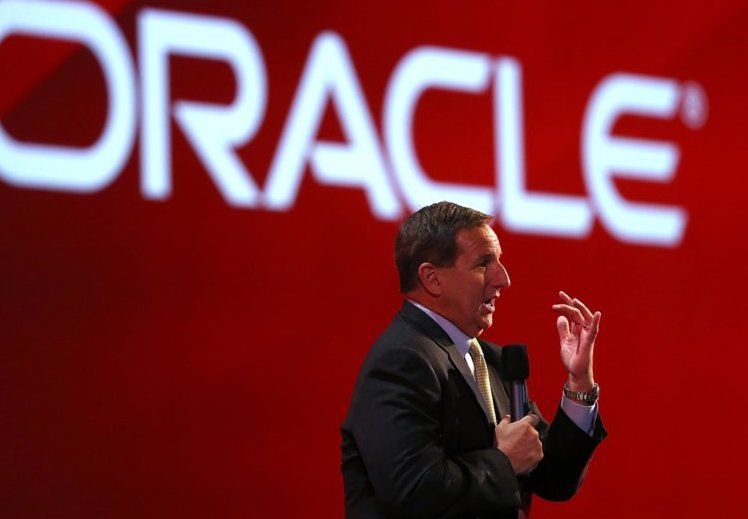 While Oracle was sharing some blowout Q4 results with the investment community last week, it leveraged the occasion to throw some trashy comments at competitors SAP and Workday while nuzzling up to new cloud partner Microsoft.

Oracle’s competitive swipes typically contain more bluster than truth, and I was surprised for two reasons to hear company execs revert to these tired tropes:

Hey—maybe there’s something in the water out in Redwood Shores. Because while I’m a firm believer in the need for companies to position themselves as optimally as possible while also pointing out why they’re superior to the competition, that can be done without coming across as somewhere between misguided and plain goofy. (Please see Grading the World’s Top 10 Cloud Vendors: The Cloud Wars Report Card.)

Exhibit A: Workday Is “Not Competitive”

On last week’s earnings call, one analyst asked Oracle CEO Mark Hurd to describe the competitive dynamics with Workday and SAP in the SaaS market.

Here’s Hurd’s reply about a competitor that’s growing faster than Oracle in the cloud:

“I think Workday does – again, my sense of Workday is they do a decent job in upmarket HCM where they can divorce the HCM buyer from the ERP buyer. When the ERP buyer and the HCM buyer are aligned and combined, they’re really in a position with no chance because they don’t have much of a financials product,” Hurd said.

“And I know they hype it and they talk about it and all that, but at the end of the day, they are just not competitive. So, for us, the market really is for us to keep moving ahead. I don’t know what our market share must be in cloud financials now, but it must be plus 90%, 92%, 93%, 94%.”

So how in the heck does Workday continue to grow every quarter in the mid-30’s?

How are they approaching a $1-billion quarter if they have no chance and aren’t even competitive?

And crucially: does that sort of talk actually boost Oracle’s stature in the eyes of customers and prospects?

SAP Is Putting All of its Customers in Play, Hurd Says

Here’s how Hurd responded to a question about the potential repercussions of SAP’s requirement that customers move to HANA over the next five years.

“What that means is, they have to roll up a big new build to move to this thing Larry called earlier, HANA. It’s a big damn build and so the poor CIO or CFO or whoever this guy is, has to show up to the board, and says to the board of directors, ‘We’ve got a $500-million build to move to HANA.’”

Hurd continued: “So yeah, I mean, I think it’s an incredibly interesting strategy on their part to put all their customers at play. Do we get calls from customers that we haven’t been called or talked to in 20 years? The answer is yes, and is it because – and remember… that when we sold to customers 15 years ago, they never really talked to SAP after that and vice versa, because you’re expected to stay with these ERP systems forever.

“So yeah, some percent of their base will move as a result of just this because it’s a lot of money for not getting much. Real simple.”

My Take on the SAP Deadline

Okay, no doubt some SAP customers will balk at the 2025 deadline for moving to the HANA database and platform, and Oracle has some chance of picking up some of those accounts.

But what about the big numbers of global corporations that are moving their SAP workloads to Azure? SAP has said that while it is eagerly supporting partnerships with hyperscalers AWS, Microsoft and Google Cloud, the IaaS partner that’s pulled out to a huge early lead is Microsoft with Azure.

In fact, the companies are working so closely together that a segment of Microsoft’s massive global sales team has begun selling SAP’s cloud applications—a stunning development that has huge implications for the overall cloud marketplace across IaaS, PaaS and SaaS. (Please see Microsoft Begins Selling SAP Applications As Cloud Ecosystem Evolves.)

Oracle needs to factor those and other developments into its positioning or else it comes across as less sophisticated about today’s market than customers expect major tech vendors to be in today’s multi-vendor, multi-cloud world.

Oracle Pairs Up with Microsoft in the Cloud

Speaking of Microsoft—formerly a bitter rival of Oracle’s but now a strategic partner in the cloud—Oracle CEO Safra Catz and chairman Larry Ellison spoke of the valued partnership the companies have established.

From Catz’s prepared remarks: “As our customers adopt our technologies, whether via licenses or cloud services, our overall customer base is growing and that growth is starting to accelerate. In addition, the recent interconnect agreement with Microsoft will only help accelerate the transition from on-premise database to the Autonomous Database service.” (Please see Microsoft-Oracle Shocker: Customers Win as #1 and #6 Vendors Pair Up.)

Ellison, during the Q&A session, expanded on that outlook.

“Most customers have Microsoft technology and Oracle technology. So they might have a Microsoft analytics suite and their data in an Oracle Database. We want to make it as easy as possible for you to run those Microsoft analytics in Azure, accessing the Oracle Database in the Oracle Public Cloud. And we’ve built these high- speed interfaces and we glue the technologies together, but we also have unified the customer experience.

Bottom Line: Does This Help Oracle With Customers?

Business customers today clearly understand the sharp-elbowed competitive realities of the cloud business. But above and beyond that, they expect modern and customer-centric cloud vendors to set aside their competitive vitriol and put customer requirements and expectations above all else.

As Oracle’s cloud business—and particularly its Autonomous Database—gain momentum in that marketplace, Oracle would do well to turn up the volume on customer value and turn down the rhetoric regarding companies that are, in fact, outperforming Oracle in the cloud.

Disclosure: at the time of this writing, Oracle and SAP were clients of Evans Strategic Communications LLC.