From Cyberspace to the Metaverse: the Literary Roots of the Virtual World 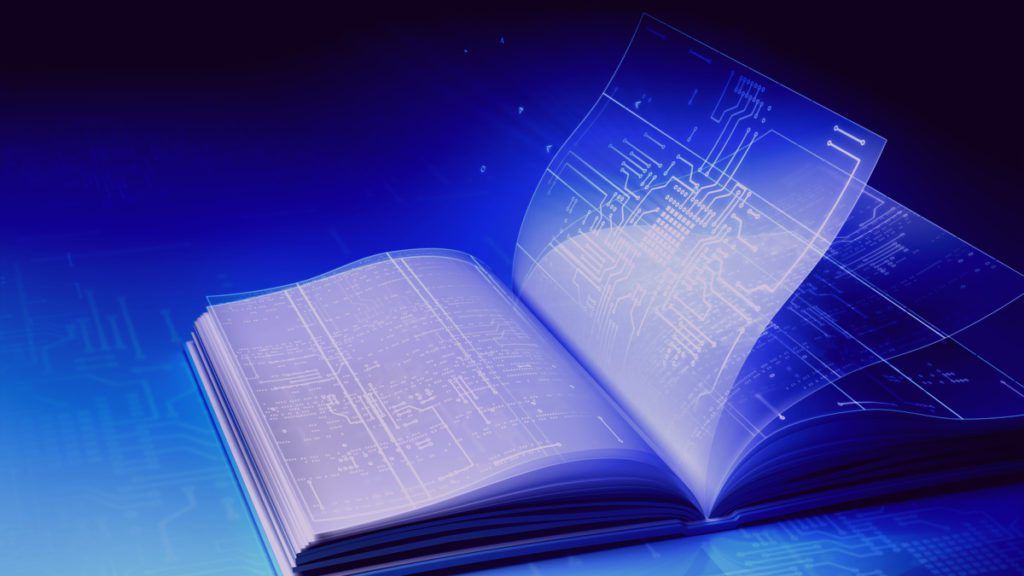 It’s widely known that the term Metaverse was first used in Neil Stephenson’s science fiction novel, Snow Crash, which was published in 1992. In researching the subject, you might’ve also come across a few references to a more modern sci-fi novel and movie, Ready Player One.

Although they both hit the nail on the head in terms of shaping our vision for the Metaverse that’s being built right now, the idea actually has deeper literary and historical roots than just Snow Crash and Ready Player One.

While it’s possible to draw thin lines back centuries to the illustration of cyborgs and artificial intelligence, back to Frankensteins and man-made universes, our journey will start in the late 1960s, when Danish artist Susanne Ussing and her partner architect Carsten Hoff called their workshop the Atelier Cyberspace, which is the first known use of the term ‘cyberspace.’

While the two were interested in using computers in their visual arts work, they didn’t have access to the technology. Instead, they focused on the “need to loosen up the rigid confines of urban planning, giving back the gift of creativity to individual human beings and allowing them to shape and design their houses or dwellings themselves – instead of having some clever architect pop up, telling you how you should live.” Their focus on giving individuals freedom over their spaces is still going strong in conceptions of the Metaverse today.

Was Cyberspace Just a Buzzword?

Then came sci-fi author William Gibson, who transformed the idea of Cyberspace in his pivotal work Neuromancer. Reflecting on his use of the word, Gibson later said that he thought it would only be an effective buzzword. “It seemed evocative and essentially meaningless. It was suggestive of something, but had no real semantic meaning, even for me, as I saw it emerge on the page,” Gibson explained in the documentary No Maps for These Territories.

Many of the words describing what we now call the Metaverse are just that: rapidly changing, semi-meaningless labels. XR pioneer points this out in an insightful diagram on Medium:

However, that doesn’t mean the ideas behind these labels are equally ephemeral. Humans are getting closer to technology with each passing day, and what started out as science-fiction is now becoming reality, from virtual reality to artificial intelligence to brain-machine interfaces.

Gibson’s novel became increasingly relevant with the Internet explosion of the ’90s, having jumpstarted the cyberpunk aesthetic and defined the vision for many of the innovators in the tech industry at the time. In a similar but more artistic way, the original Tron movie from 1982 also builds atop the vision of cyberspace.

The Emergence of the Cypherpunk Movement

As the Internet unfolded, the field of cybersecurity emerged. With it came the cypherpunk movement, which is considered the historical origin of the sociopolitical significance of Bitcoin and other blockchains. This movement focused on providing privacy and individual freedom through technological means. It started as a mailing list with only a few hundred people throughout most of the ’90s. Many from that original list have dramatically shaped where we are with blockchain and cryptocurrency today.

The First Appearance of the Term ‘Metaverse’

In 1992, Stephenson came out with Snow Crash, where the word ‘Metaverse’ first appeared. Stephenson describes the world, which is accessed through virtual reality headsets, as a black sphere larger than Earth with a radius greater than ten thousand kilometers. Going around the equator of this geometric sphere is “the Street,” a grand boulevard along which users can build freely.

“In order to place these things on the Street, they have had to get approval from the Global Multimedia Protocol Group, have had to buy frontage on the Street, get zoning approval, obtain permits, bribe inspectors, the whole bit,” Stephenson writes.

In describing the user base of the Metaverse, he points out that only a tiny fraction of the population at the time had sufficient equipment and a network fast enough to access the Metaverse.

“At any given time, the Street is occupied by twice the population of New York City. That’s why the damn place is so overdeveloped. Put in a sign or a building on the Street and the hundred million richest, hippest, best-connected people on earth will see it every day of their lives.”

If you’re intrigued by Stephenson’s vision, I would recommend reading the book. He describes how avatars look, how they move, what happens when they die, how files are transferred using ‘hypercards,’ and the famous exclusive club, The Black Sun.

There are also a lot of nice details that may be realized one day such as: “When Y.T. comes in, Ng stands up and bows. This is how hardcore Street wackos greet each other. They don’t like to shake hands because you can’t actually feel the contact and it reminds you that you’re not even really there.”

Will Robots Rule the Metaverse?

The Matrix trilogy quickly followed and took a different approach. Instead of voluntarily entering a human-owned virtual world, intelligent robots keep humans subdued and feed off their energy by imprisoning them in a virtual world that’s indistinguishable from reality called The Matrix. Although this story is just as much about artificial intelligence as it is about virtual worlds, it was even featured as the main demo for Epic’s graphics platform, Unreal Engine 5.

In more recent years, we’ve also seen stories like Ready Player One, Black Mirror, Free Guy, and Ralph Breaks the Internet. In many ways, these films are built atop the foundation set by Snow Crash, Neuromancer, and The Matrix trilogy, but within the context of modern technology and culture. It’s interesting how the majority of today’s most powerful figures in technology grew up with that very foundation. While Snow Crash and The Matrix are fiction, their impact on civilization’s imagination is not — the conversation about technology often starts in sci-fi stories.