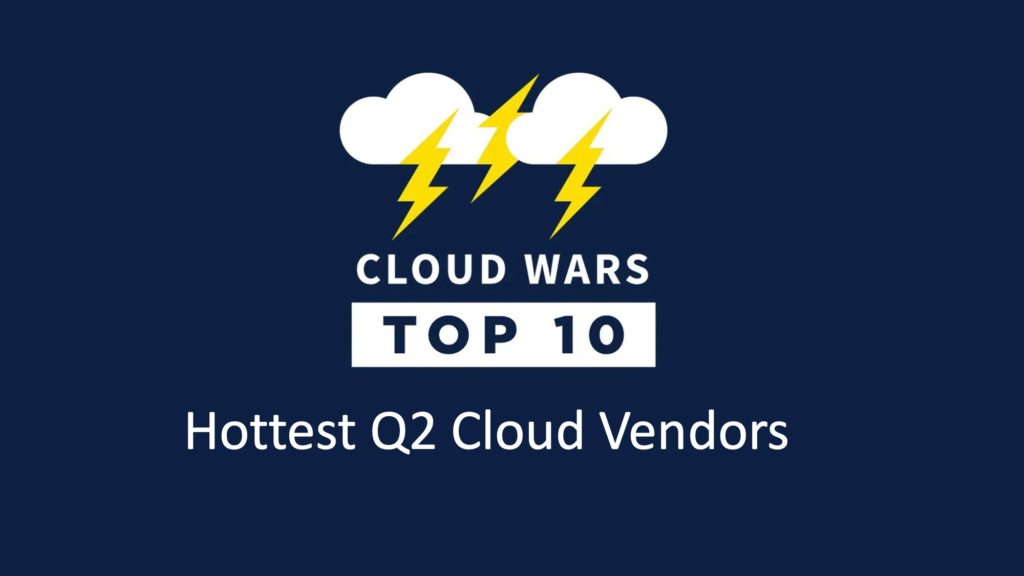 So, let’s take a look at each of those four companies, as well as a fifth that could leapfrog the entire bunch when it posts its latest numbers in about five weeks.

With revenue up 36% to $6.3 billion, Google Cloud continues its 18-month run as the world’s hottest cloud vendor. While 36% is a terrific achievement for a company of Google Cloud’s size — it will finish the year with about $27 billion in revenue — that figure is down from the mid-40s growth figures Google Cloud has posted in each of the past six quarters. A big factor in Q2 was, of course, the foreign-currency exchange rates that have strengthened the dollar and resulted in lower revenue totals for all of the major cloud vendors. Well, all of them except….

Because it is headquartered in Germany and not in the U.S., SAP actually benefitted from the currency capers and the 34% cloud-growth figure it rang up in Q2 might not be sustainable should the dollar weaken. At the same time, SAP reported superb growth and current backlog for its S/4HANA Cloud ERP applications (Q2 revenue growth of 84%, or 72% in constant currency; and current cloud backlog of 100%, or 87% in constant currency).

SAP also said its Business Technology Platform posted a growth rate of 40% on revenue of about $380 million. Plus, SAP’s Concur spend-management business grew 20% for the quarter as it continues to come back after being devastated during the travel restrictions of the pandemic.

Only in the Cloud Wars could an iconic brand like AWS post revenue growth of 33% to almost $20 billion and still finish in third place among the fastest-growing players. AWS generated Q2 revenue of $19.7 billion and is second in cloud-revenue volume to only Microsoft.

But as we noted yesterday, AWS has been growing significantly faster than Microsoft for more than a year, and I don’t think it’s a stretch that Nadella’s fixation on “taking share” during his remarks on Microsoft’s July 26 earnings call is a very direct and blunt reaction to that momentum from AWS. Again, you can read all about that in Microsoft Launches Market-Share War, and Customers Will Surely Win as both Nadella and CFO Amy Hood look to get their company back on offense.

Speaking of going on offense, last year, I predicted that Microsoft would top $100 billion in cloud revenue in calendar 2022, and the company’s ability to hit $25 billion in the second calendar quarter — in spite of the foreign-currency challenges — speaks to the enormous market power of the Cloud Wars Top 10 company for the past 3-1/2 years.

Nadella’s language on the earnings call was more blunt than usual. While Microsoft will be looking to regain the initiative, we can be 100% confident that AWS and Google Cloud will surely be doing the same. That means business buyers can expect to be on the receiving end of fantastic deals from each of those companies and their partners in the greatest growth market the world has ever known.

I mentioned I’d touch on a fifth company, and that would be Larry Ellison and his crew at Oracle. In mid-June, when Oracle released its fiscal-Q4 and full fiscal-year results, CEO Safra Catz offered some eye-popping guidance for the company’s first fiscal quarter, which ends in less than a month on Aug. 31. Catz said that, for the fiscal year that began June 1, the company’s organic cloud growth would be 30%, which in itself is pretty impressive. But Catz then added that for the fiscal Q1 ending Aug. 31, Oracle’s cloud-revenue growth rate including Cerner‘s financial results would come in between 44% and 47%.

If Oracle is able to achieve the guidance numbers offered by Catz, then Oracle would become far and away the fastest-growing major cloud vendor in the world.

Is this a wild market or what?